Saints beat Warrington in a battle of the top two in a bruising encounter at the Halliwell Jones Stadium to extend our lead at the top of the table to eight points following a dramatic late display resulted in a 21-10 victory.

A first half dominated with big tackles and excellent defence from both sides saw Warrington head into half time 4-0 up after two Declan Patton penalties. The second half started with another Patton penalty conversion, but back came Saints and after an excellent break from Jonny Lomax led to Mark Percival scoring in the corner. Luke Thompson was next to score after the forward picked up the loose ball and raced in to score and on the next set Lachlan Coote dropped a goal extending the lead to seven.

A quick fire try from Jake Mamo brought the game back into contention, but a typical bulldozing run from Alex Walmsley sealed the crucial victory before Coote converted a penalty late on.

In the highly anticipated first vs second Betfred Super League fixture between the best two teams in the competition, it was the Wolves who started the better of the two sides forcing back to back sets on the Saints line before a nasty looking neck injury forced Aaron Smith off the field.

It was the Wolves who got the first points of the match after Saints were penalised for not being square at the play the ball. Patton converted the penalty before he converted another penalty minutes later as Mark Percival was adjudged to of obstructed the Warrington player.

The remaining first half was a battle of the forwards as both sides held good field position, but were unable to get over the try line due to excellent goal line defence as the Wolves went in ahead at the break.

The hosts got the first points of the second half through another Patton penalty right in front of the posts which extended the lead to six points.

Saints went close through Morgan Knowles as he caught the Warrington defence off guard, but was called to have knocked on inches out from the line.

But Saints continued to press and got the first try of the match after Jonny Lomax found the gap in the defensive line and ran 30 metres before being hauled down. On the next tackle Coote fed Theo Fages and the Frenchman found Percival who threw the dummy and scored in the corner. Coote with all the pressure on his back converted brilliantly off the touchline to tie the score at 6-6 on the hour mark.

Then with Saints having the momentum, Lomax’s high bomb was picked up from dummy half by Mamo only for Lomax to hit the full back with a solid shot which resulted in Mamo dropping the ball. Thompson picked up the loose ball and stepped past three covering defenders to score sending the Saints fans wild! Coote added the two.

On the next set Saints won a penalty putting them in excellent field position and on the last, the ball was passed to Coote and he calmly slotted over the drop goal making it 6-13.

From the kick off Warrington went short and Mamo picked up the loose ball and raced past two Saints defenders to score to set up a nervy last few minutes.

Patton missed the extras before Saints put the game to bed as Joe Philbin knocked on and our big bruising forward, Walmsley did the rest, powering his way over and taking three Warrington players with him. Coote again added the two.

With seconds left Saints won a penalty in front of the posts and Coote added the final two points of the game which meant Saints marched eight points clear at the top of the Betfred Super League table. 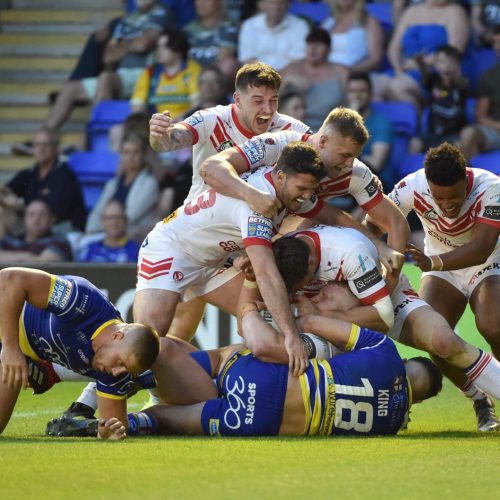 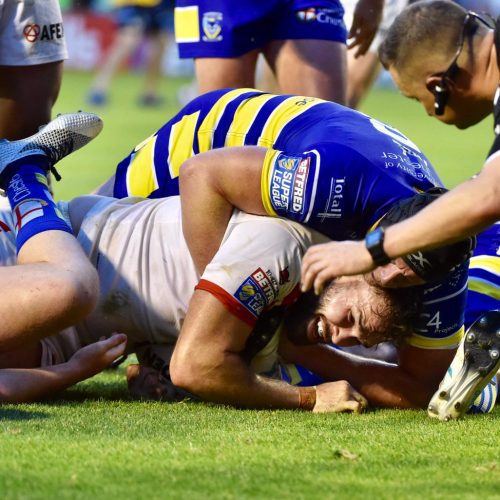 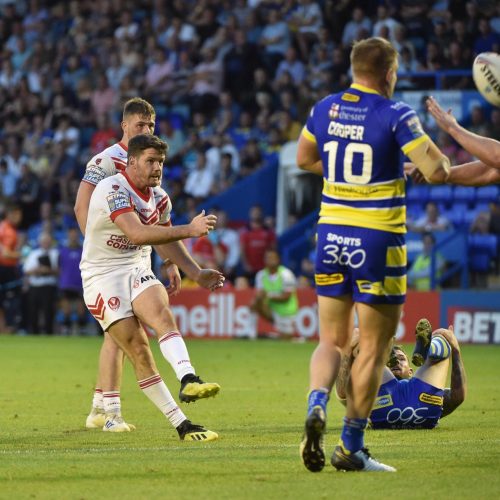 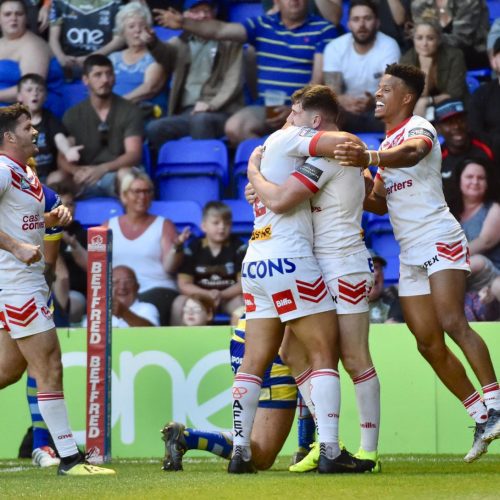 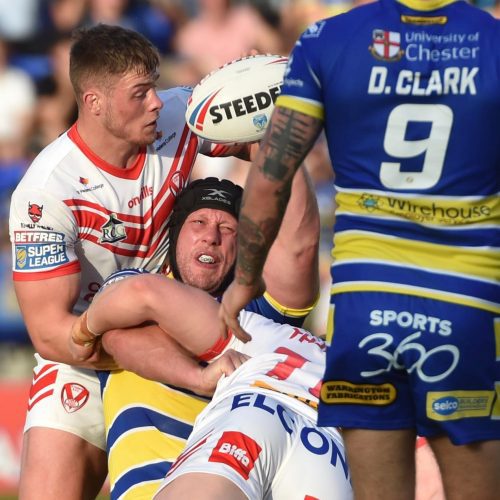 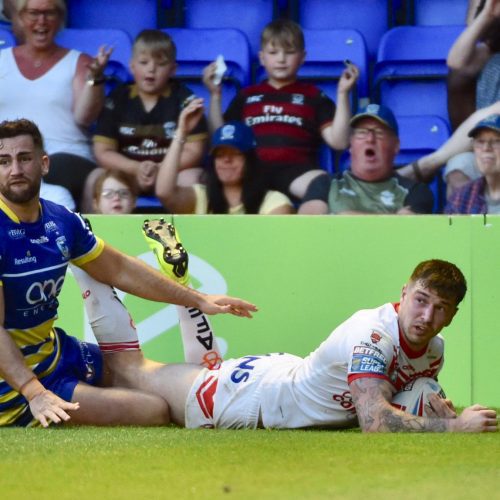 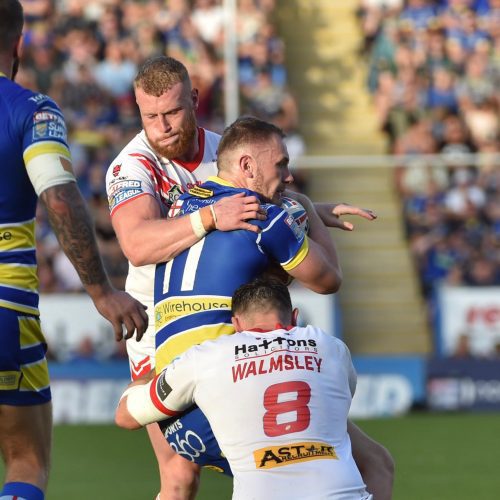 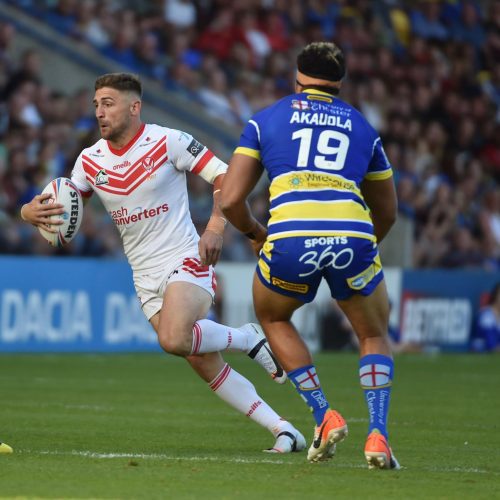 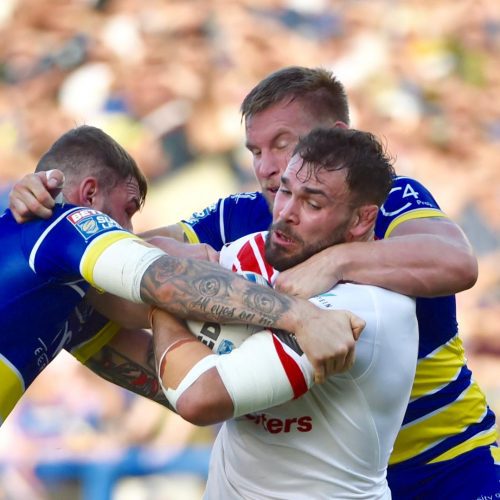 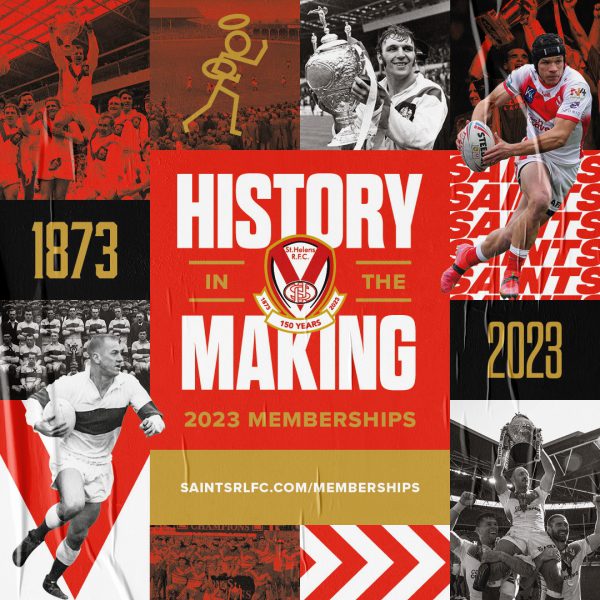