Saints came away with a 32-10 victory over bitter rivals Wigan Warriors on derby day in front of a home sell out at the Totally Wicked Stadium.

Two first half tries from Tommy Makinson and a Lachlan Coote penalty sent Saints in at the break with a 12-4 lead after Zak Hardaker had converted two penalties for Wigan.

Saints started the second half in perfect fashion with Coote latching onto a Theo Fages kick to extend the lead. Two more Saints tries followed as Kevin Naiqama pounced on a Wigan knock on to score and Jonny Lomax chased down a blocked kick to pick up and score. Hardaker scored a consolation try for Wigan, but Saints came away with the bragging rights.

On Derby Day in front of a sold out home end at the Totally wicked Stadium, it was the visitors who got off to the better start forcing back to back sets on the Saints line and then winning a penalty in front of the posts which Hardaker converted.

Wigan weren’t ahead for long though as a barnstorming run from Alex Walmsley caused mayhem in the Wigan defence and forced the visitors to concede a penalty and Coote levelled the game.

Saints scored the first try of the night after a flowing move down the right edge finished with Lomax providing the cut out pass to Makinson who finished typically in the corner. Coote unable to convert off the touchline.

From the kick off, a knock on from Fages gave Wigan excellent field position and after winning a penalty they took the two reducing the depict.

Saints and Makinson were in again minutes from half time after an excellent move down Saints’ right ended with the impressive Dominic Peyroux feeding Makinson and the golden boot winner walked in at the corner for his second. Coote converting brilliantly off the touchline giving Saints an eight point lead at the break.

Saints got off to a flyer in the second half as a Lomax run was stopped inches short from the line. On the next play James Bentley found Fages and his neat kick through found Coote who was there to touch down. Coote added the two to his own try extending the lead.

Naiaqama was next to score as the centre pounced on the loose ball after a high bomb from Fages was knocked on by Wigan winger Joe Burgess and Naiqama was there to pick up the ball and crash his way over. Coote adding the two.

The scoring didn’t stop there as the hard working Morgan Knowles charged down a Thomas Leuluai kick and Lomax had a clear run to simply touch the ball down to extend Saints lead.

Wigan pulled a try back through Hardaker as the full back blocked a Saints kick and kicked the ball on to chase and pick up himself and score to get Wigan’s first and only try of the night. Hardaker adding the extras himself.

But that didn’t stop Saints fans singing loud and proud at the final whistle after a hat-trick of derby day victories. 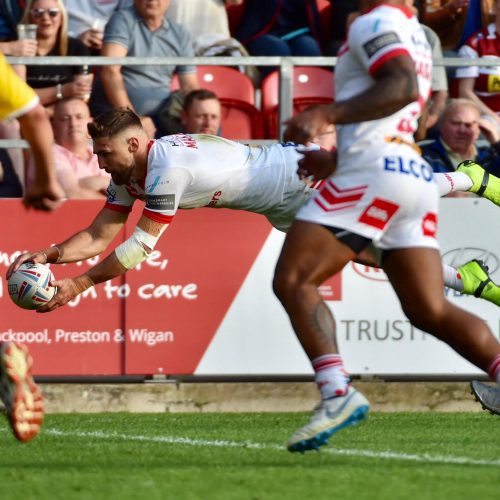 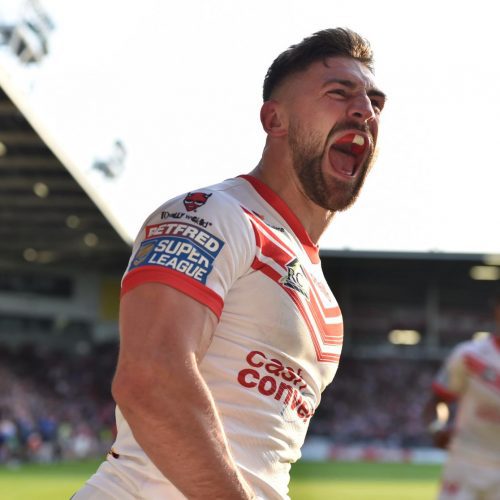 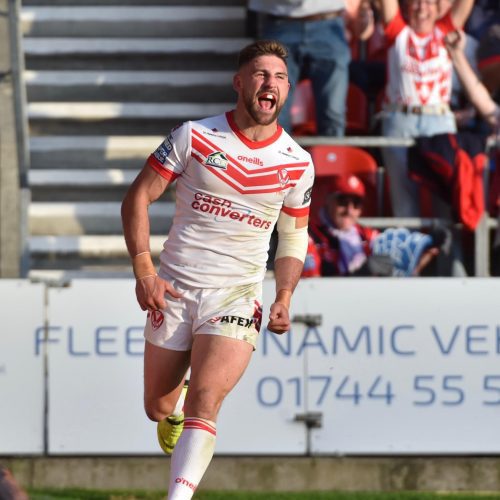 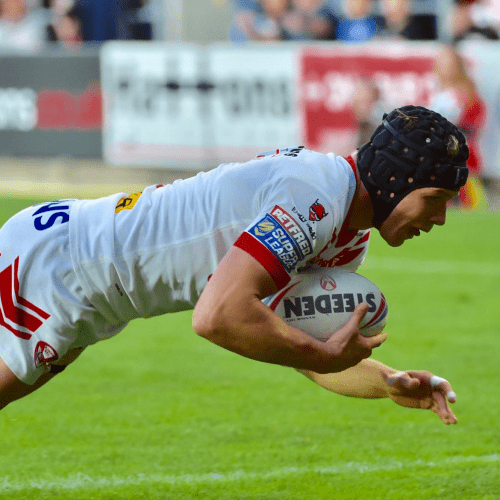 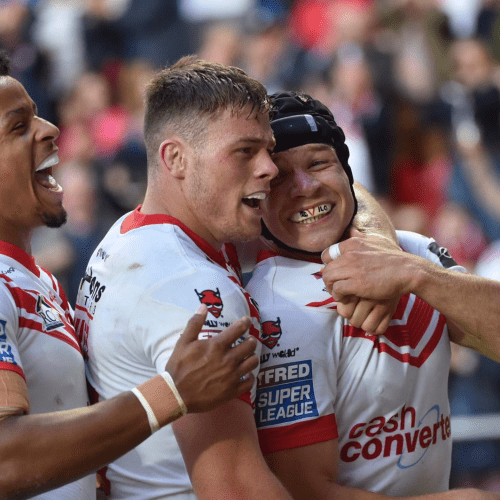 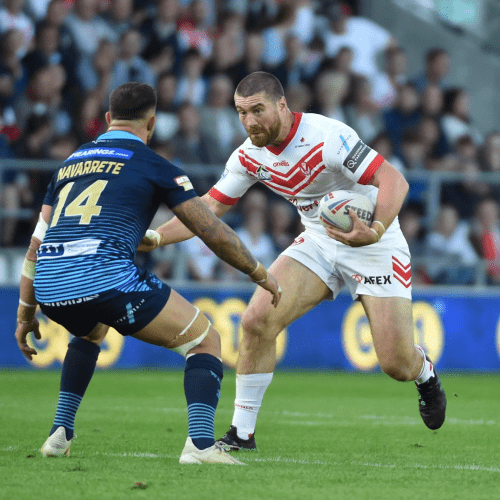 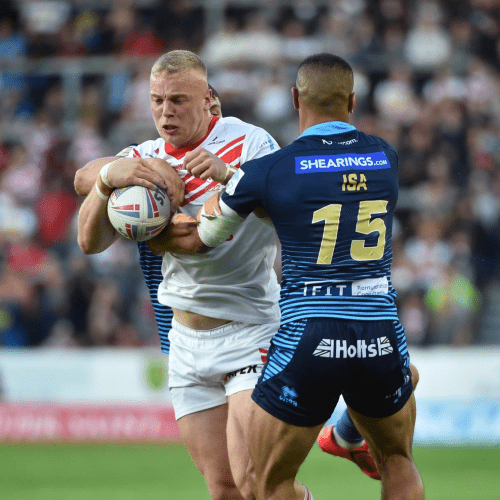 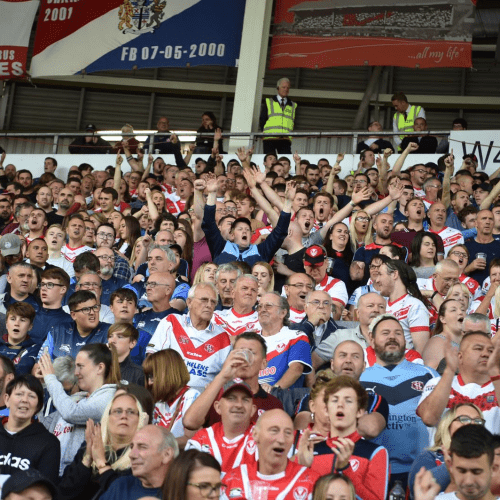 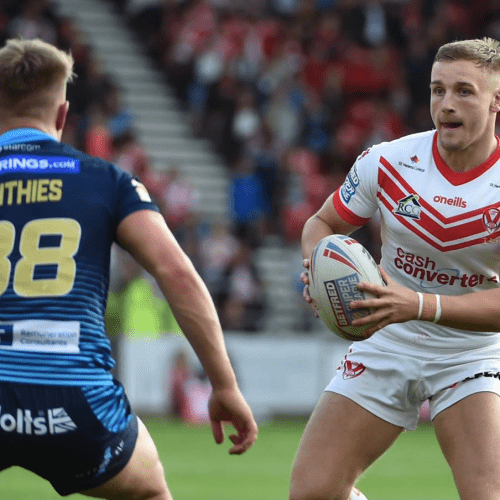 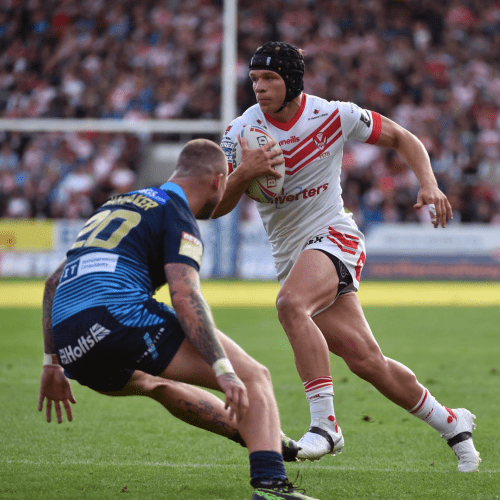 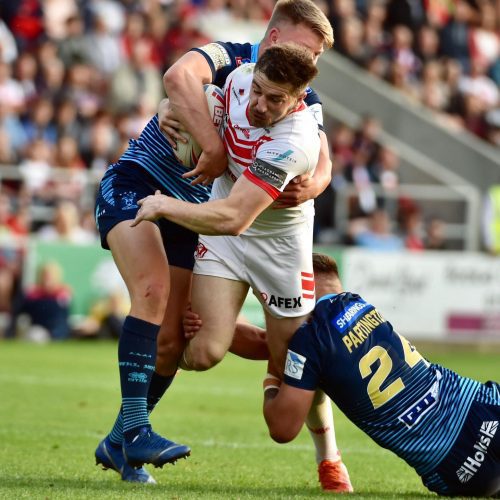 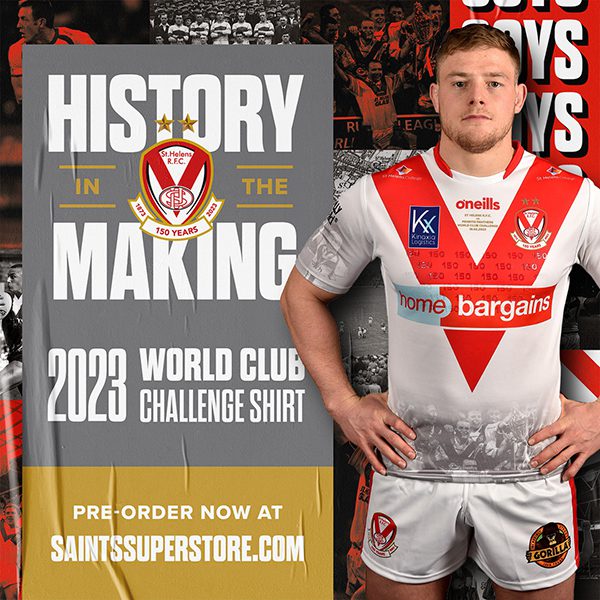