With 500 days to go until the opening fixture of the Rugby League World Cup 2021 (RLWC2021), tournament organisers have announced that St.Helens will act as the training bases for Kristian Woolf's Tonga as well as Italy’s men’s team.

There’s going to be some very special visitors from around the world to Liverpool and St Helens for @RLWC2021… let’s find out more! 👇 #PowerOfTogether #RLWC2021 | @visitliverpool @sthelenscouncil @Saints1890 pic.twitter.com/A2XDcJvdtc

Tonga and Italy, ranked 4th and 13th in the world respectively, will prepare for matches at St Helens Council’s £3.6m state-of-the art Ruskin Drive Sports Village which the Saints often use to train; nearby Cowley International College – our main training base – which boasts top-class training facilities to an international standard; and the new fitness suite at Newton-le-Willows Health and Fitness.

As well as hosting two teams for training purposes, St Helens Borough will also stage three men’s group matches at our 18,000 capacity Totally Wicked Stadium, considered by many to be the best purpose-built club rugby stadium in the country.

The overall impact of St Helens Borough’s involvement in the Rugby League World Cup, tipped to be the biggest and best one to date, is expected to boost the local economy by more than £3m and will benefit the grassroots game through a number of legacy projects.

You may see some familiar faces in this Saints fans…👀

Rugby League is in the blood of St Helens 🏉 🩸

“With our Head Coach, Kristian Woolf, also coaching Tonga, it’s of course extra special for him and the club – and over the coming months we will be working hard to ensure it is an experience to remember for everyone involved, including the players, coaches, staff and whole St Helens community.”

St Helens Council leader, David Baines, said: “The Rugby League World Cup is going to a be a sensational event and we’re very much looking forward to welcoming Tonga and Italy to St Helens. I know that the players, staff and fans will get a very warm welcome from everyone in the borough.

“The teams can also rest assured that their match preparations could not be better placed when they visit Ruskin Drive Sports Ground – one of the finest multi-purpose sports complexes in the region; Cowley, where some of rugby league’s biggest stars train day in, day out; and the recently redeveloped Newton-le-Willows Health and Fitness, a top class, state of the art facility. And of course, the world class Totally Wicked Stadium will host three men’s group games. There’s no better club rugby stadium in the country.

“For St Helens Borough to be chosen to be part of a global celebration of rugby league speaks volumes of the borough’s proud past and achievements in the sport. We proved during the last World Cup back in 2013 how welcoming our borough is, and we’re more than ready to do it all again.”

Following this announcement, the fixtures for all three tournaments will be announced in the coming months.

RLWC2021 has today also revealed new branding for the tournament, celebrating the power of together, focusing on human interest stories and emotional connections, with the goal of connecting with a universal audience.

The new branding will also include bespoke elements from each host, drawing on recognisable icons and displaying the sense of civic pride each host has for its town or city. RLWC2021 will be asking people from each town and city to vote on the icons that make up their custom patterns in the coming months and will be doing something similar for the nations towards the end of the year.

Jon Dutton, RLWC2021 Chief Executive, said: “Today marks another hugely exciting milestone on the road to Rugby League World Cup 2021 as we celebrate 500 days until the opening fixture at St James’ Park in October next year.

“Liverpool and St Helens will play a huge part in RLWC2021, with Anfield hosting a men’s quarter-final, along with an England women’s fixture, while the M&S Bank Arena will host the wheelchair Rugby League final. St Helens’ brilliant stadium will play host to three men’s group fixtures, and now with confirmation that Tonga and Italy will be based in Liverpool and St Helens, these dedicated and passionate fans have another reason to get excited about RLWC2021.

“Our refreshed tournament identity and today’s nation base announcement can serve as an exciting reminder for the people of Liverpool and St Helens of what’s to come in 2021 as we continue to build momentum towards what promises to be the biggest and best Rugby League World Cup in history.”

To be held in England in the October and November, organisers are aiming to draw in record crowds at the 2021 tournament, with the men’s, women’s and wheelchair competitions staged in a single, celebratory event – making it the biggest Rugby League World Cup yet.

Please visit www.RLWC2021.com for more information and for details on how to sign up to the receive ticket alerts and all the latest news first. 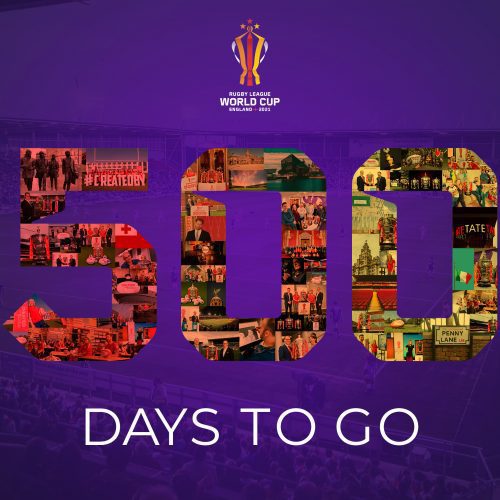