The first real chance of the game came after six minutes. On the last tackle, ten out from the visitors line, the hosts opted to run the ball down the short side. Konrad Hurrell being held up just a metre away from the line.

The hosts weren’t to be kept out for much longer. After 14 minutes, James Bell ran the ball in and threw a pass to his outside just before contact to Curtis Sironen who strolled through the broken Vikings line to score in the right corner. Ben Davies nailed the tough conversion, 6-0 the hosts led.

25 minutes in the lead was further extended. Jonny Lomax made a break down the left edge and fed it to the supporting, and returning, Lewis Dodd who went over from close range. Davies converted, 12-0 Saints led.

With six minutes of the half to go, Joey Lussick was sent to the sin bin for stopping a quick Vikings play the ball during a break downfield.

With less than a minute of the first half to go, Saints once again worked the ball to their right edge on the last tackle but Jon Bennison was held up a metre short on the line. That was the final chance of the half, as Saints led 12-0 at the break in the Mark Percival Testimonial at the Totally Wicked Stadium.

It took just six minutes for Saints to increase their lead in the second half. The ball was loose on the floor and James Bell capped an impressive individual display by reacting first to score. Davies was unable to convert as his attempt bounced out off the post, 16-0.

Widnes’ first spell of pressure on the Red Vee’s line came in the 58th minute as they were awarded a penalty in the Saints 20. After initially being stopped two metres short of the line, Shane Grady was held up over the line on the last tackle as the hosts’ defence stood firm.

Minutes later the Vikings did go over. Saints fumbled the ball in their own 20 and during the set the visitors spread the ball from left to right and Ryan Ince finished in the corner. Tom Gilmore added the extras, 16-6 Saints led. The visitors thought they had further reduced the deficit a few minutes later as they dove in near the left touchline, but the touch judge had already raised his flag so the Red Vee still led by ten.

As we entered the final five minutes of the game, Widnes went over again. A move from right to left ended with Brad Holroyd cutting in from the wing and he was able to ground the ball before being forced into touch. Gilmore converted, 16-12 Saints led.

The final play of the game saw the Vikings break down their left wing and Holroyd kick the ball back inside, but some great cover defence from Will Roberts saw him walk the ball out for a goal-line dropout which ran down the final few seconds of the game to seal the 16-12 victory for the hosts in Mark Percival’s Testimonial!

Saints TV: Mark Percival gives his thoughts on his testimonial and our Australia trip

Wellens: Focus is on strong 2023 and World Club Challenge for Percival 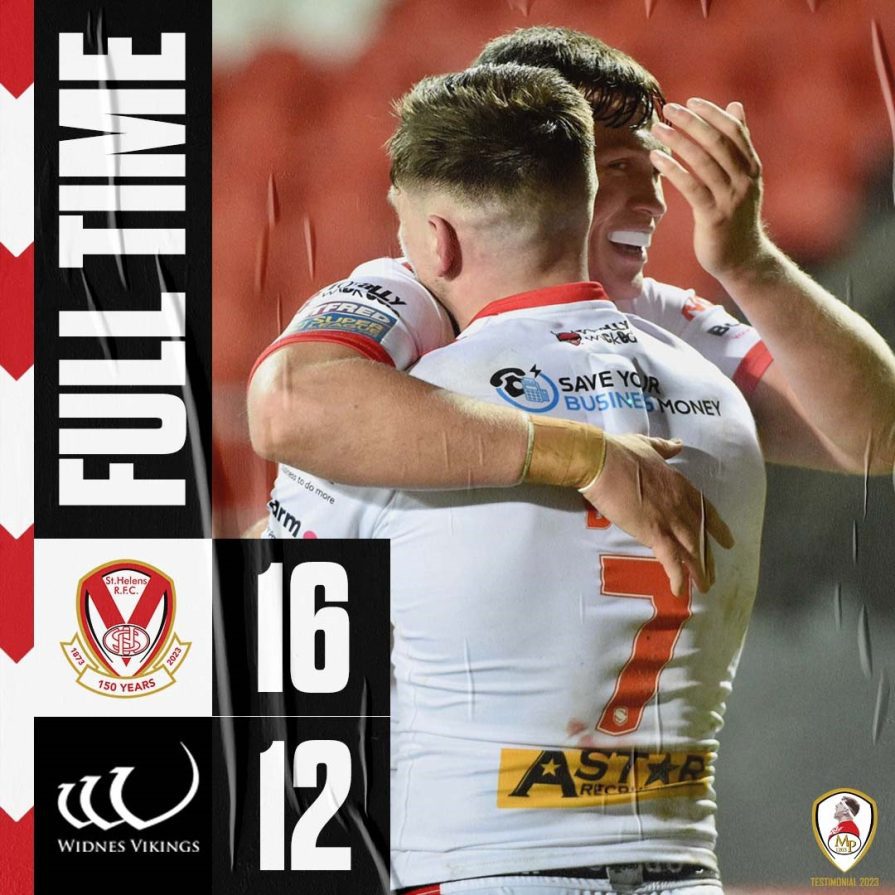 The Saints secure the win over Widnes in our first game in 2023!

Fantastic effort from Will Roberts at the end to clear a dangerous kick into the in-goal area and seal the Saints win.

Gilmore adds the kick from the sidelines.

With numbers on their left-edge the Vikings get their second through Brad Holroyd, but the young Saints almost forced him into touch.

Time off with a Widnes player getting checked over.

Bruines and Royle stop Vikings on the right-edge well.

Widnes have some wind in their sails now against our young bucks. McKenzie Buckley though stops their charge with a great tackle into touch at the corner.

Gilmore adds the kick from the sideline.

Ryan Ince gets the first points of the night for Widnes.

Vikings go to their right-edge and he dives in at the corner off a late pass.

Good defence from the Saints, holding Widnes up over the line.

Ben Lane calmly takes a smart Widnes kick on the last about 20m out, he stays in field in doing so.

James Bell gets a much deserved score, he has been great tonight! A high bomb isn’t caught by Widnes and it goes back into the in-goal area. Belly leaps on it for a try!

46: Fantastic kick return by Ritson, he moved way in field to collect a good Widnes kick and then breaks past two Vikings players to move us out of dodge.

Saints are back to a full thirteen men, Lussick though is replaced by Taylor Pemberton on the field.

Back underway for the second half! 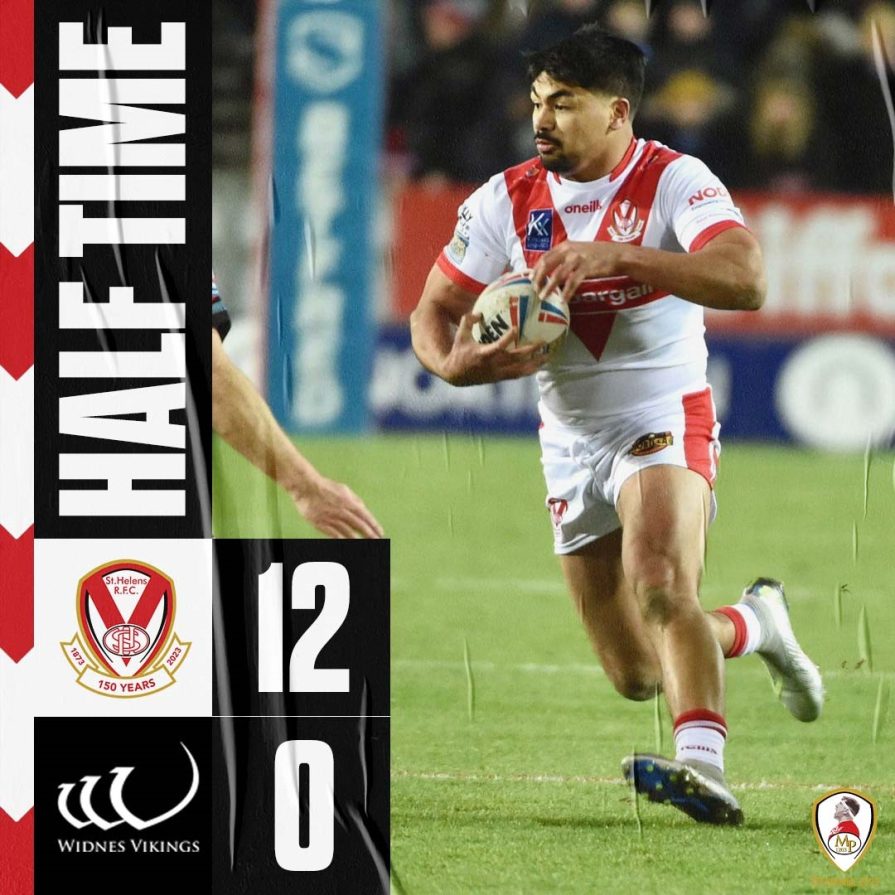 ⏸ Saints are up by twelve at the break in Mark Percival’s Testimonial Game.

Bennison is oh so close to a third try, he’s driving it in at the right corner but is one metre short.

Shane Grady cuts through for Widnes, passes to a supporting player but they knock on.

Lussick is sent to the bin for holding down Davies.

Widnes broke through the line and the Vikings player had nothing between him and scoring but tripped. Joey tackled him and gets sent for 10.

Ritson gets his hands on a loose ball, he tries a grubber kick and chase but Widnes dive onto it.

Ben Davies adds on the extras!

Saints push Vikings back to their own 20m and Lomax times a pass on a half break brilliantly to Dodd for a score on his return! 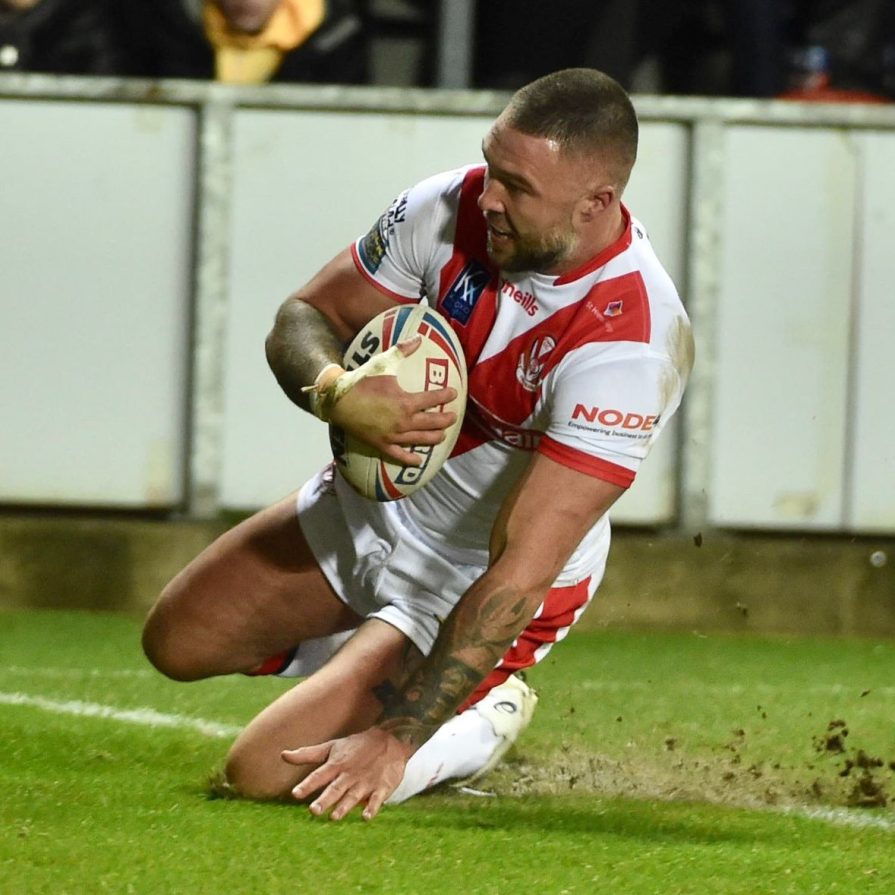 First try scorer for the Saints in 2023

Missed opportunity for St Helens, Davies makes a big break and passes it to Bennison but looking over his shoulder he gets held just short of the line. Widnes hold Saints out for now.

Ben Davies slots the goal from the wing!

TRYYY! A beauty of a short ball from Bell and big Curtis Sironen gets the Red V’s first meat pie of 2023!

Saints have Widnes on their own line again, good drive in from LMS but it’s followed by a knock on.

First threat of the game and it is the Saints who come close, Hurrell drives in on the right corner but five Widnes players are needed to hold him up. 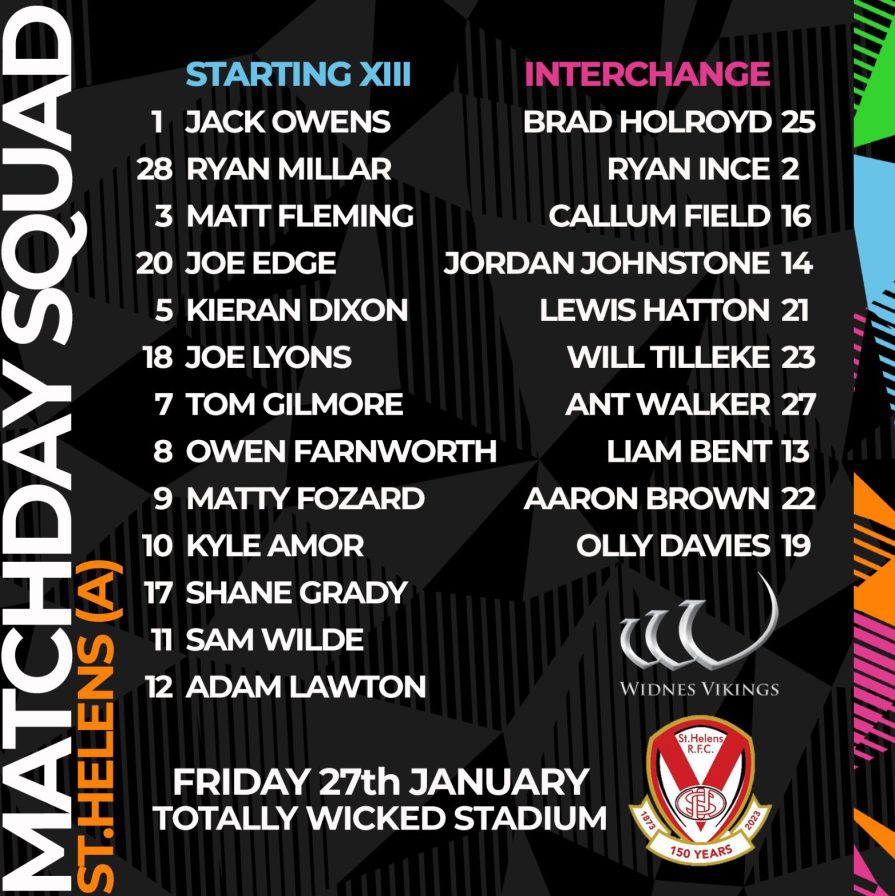 Here is how the Vikings line-up tonight!

Six former Saints in their squad, can you name them all? 🤔 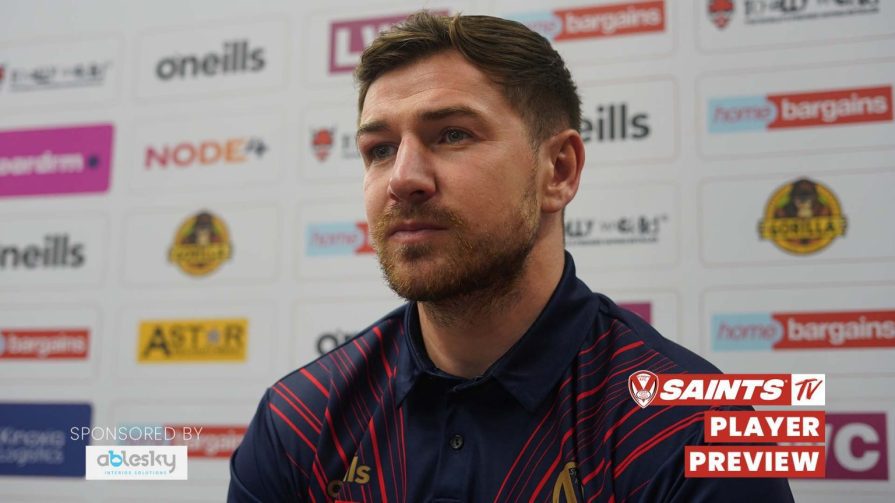 Tonight is all about Percy, and whilst he is not featuring on the field – bigger challenges are just around the corner…

WATCH 📺 Percy’s preview of the game on Saints TV 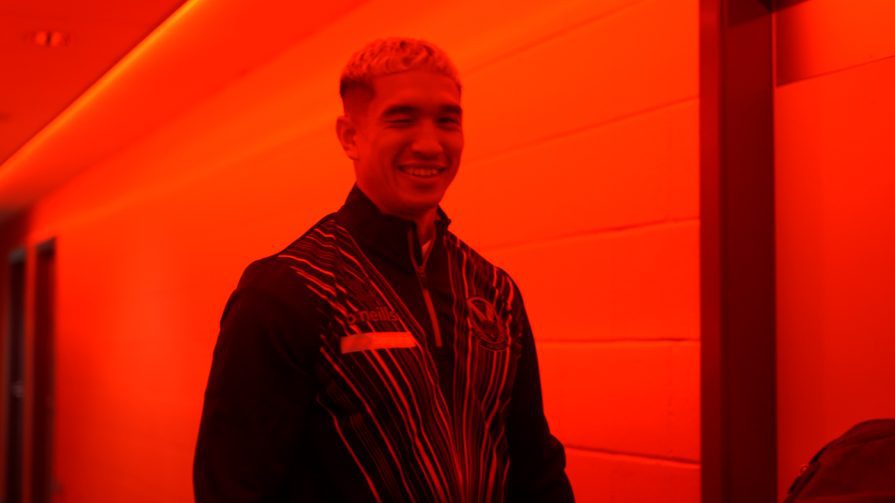 😉 First appearance as a Saint incoming. 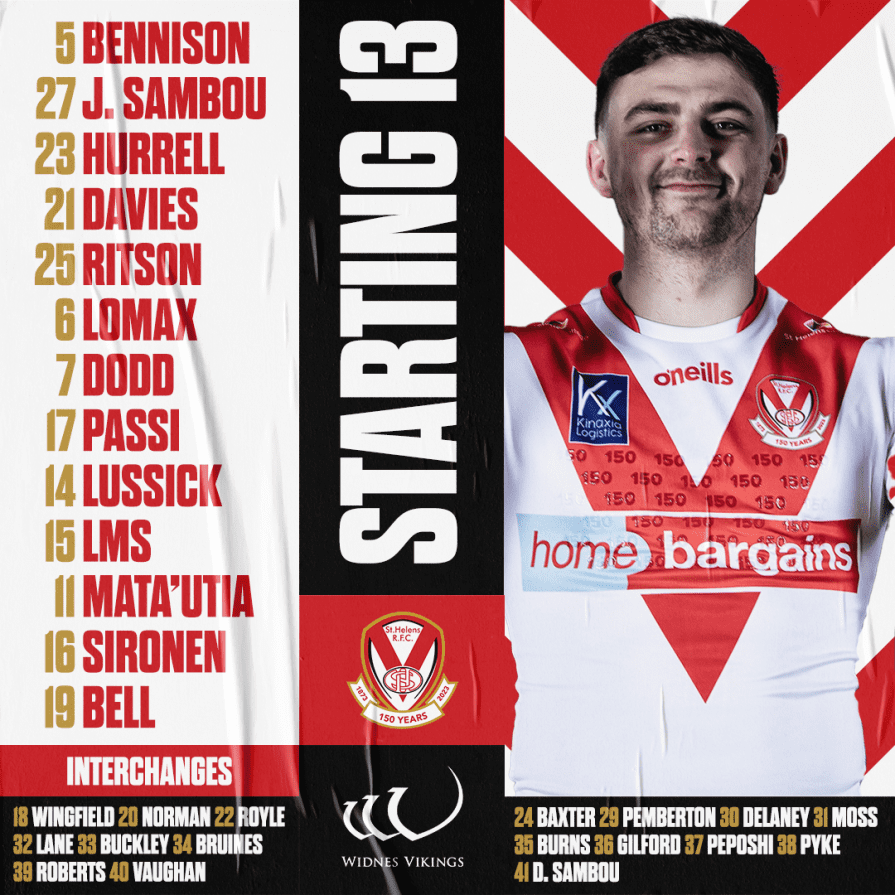 Here is how the Saints line-up for the first time in 2023 and for Percival’s Testimonial!

Dodd is in action for the first time since April as Paul Wellens names a strong starting squad with plenty of youth to feature! 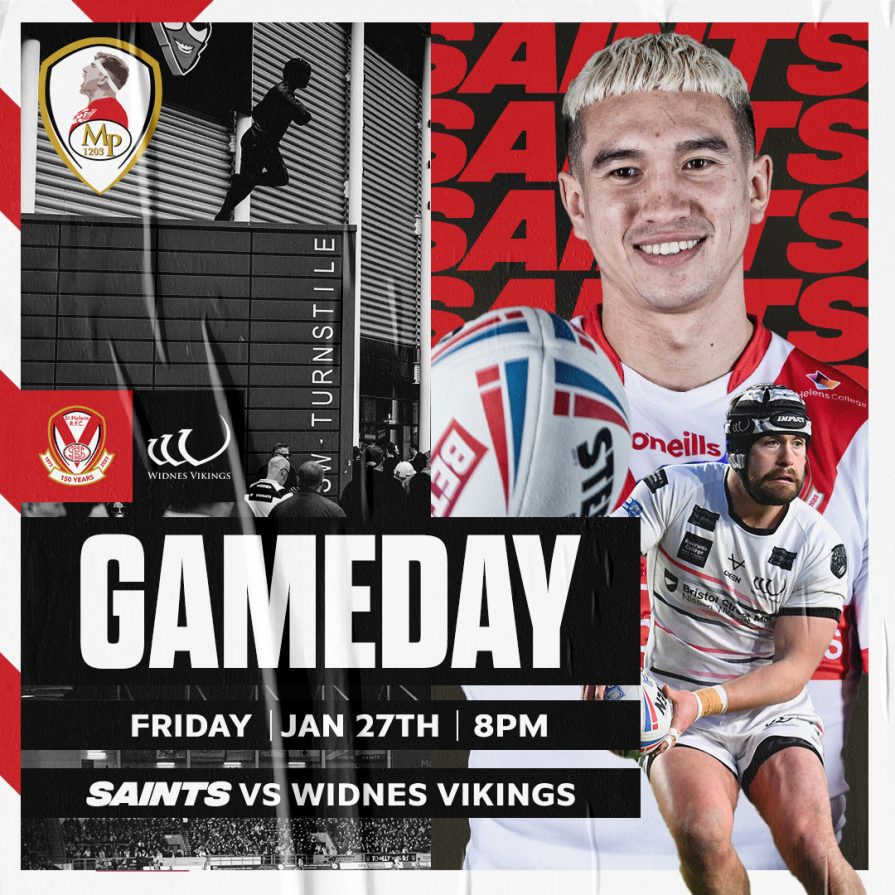 Welcome along to our Match Centre for St Helens versus Widnes Vikings, which will be Mark Percival’s Testimonial Game!

A star centre for the Saints, who has 199 career appearances in the Red V.